There is exactly one month until I leave South America. That can seem like both a long and incredibly short amount of time, but before then, I have more time coaching in Buenos Aires, a 10-day trip to Patagonia and the end of the world and five days in Brazil at the Copa America. So, at least I’ll be busy. On with the blog…

A familiar routine, returning to places for a third or fourth time, knowing which supermarket is cheapest for which type of pasta or meat, learning the bus routes, finally remembering to look the ‘wrong way’ when crossing the road. These are the signs of properly getting to know a place. Buenos Aires really does feel like a second home, even though I’m yet to explore at least 90% of what is an absolutely enormous city.

As with any week in this mezcla of Latin American and European influences, there were moments of brilliant wonder and others of complete and utter frustration at the sheer disorganisation that is inevitable in this continent.

Many hours of this week were spent trying and, at least temporarily, failing to organise a 10-day trip to Patagonia for me and three others. I took two visits to the same airline office, waited in the same queue for three hours in total, and was told three different conflicting instructions. Argentina.

But while that helps to shape my perception of this city, what has a more lasting impact is the man outside El Estadio Diego Armanado Maradona noticing three mildly bemused tourists and asking us if he could do anything to help or the 40-minute conversation with an Uber driver about our two respective countries.

My volleyball skills are getting better, that’s one thing. I play for an hour a week every Tuesday, helping out with a coaching session in Barracas before an hour of football. The mix of young kids and 30-something women are starting to laugh at my attempts less.

Most days are football-consumed, though. Monday through Thursday involves coaching, while the weekend always involves a match at a bar or at a stadium.

On Sunday, two others and I visited Estadio Diego Armando Maradona for a second time. The first time had been a match on a sunny afternoon with marijuana filling the air, beers in hand, smiles everywhere. This match was more intense, the terrace on which we stood more full of people and passion. 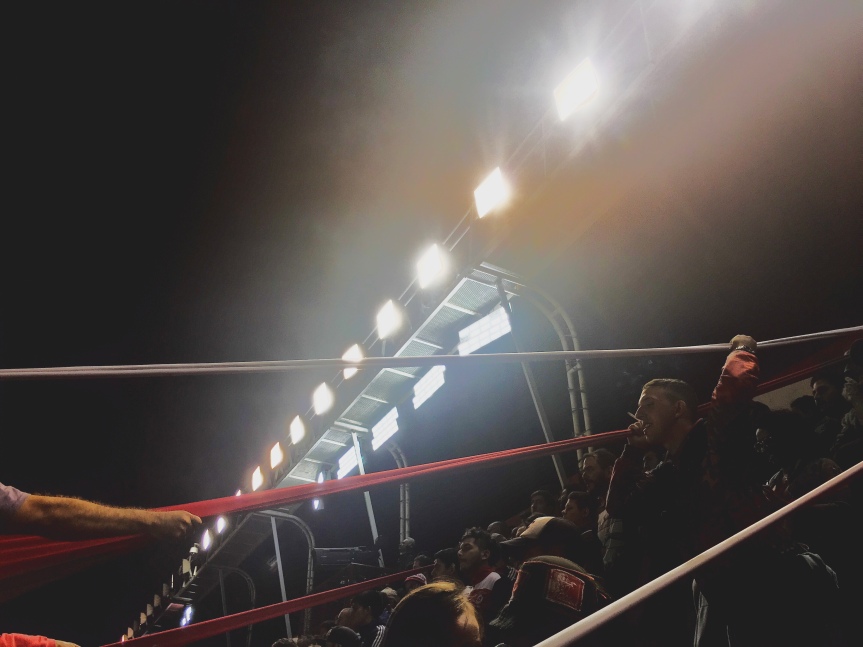 Argentinos Juniors, the home side, took on Boca Juniors, South America’s biggest football club, in the semi-final of the Copa Superliga. Argentinos are a small club with little history of success. In the ’80s, they lifted the continent’s biggest prize, the Copa Libertadores, and they’ve won the league a couple of times, but in general, they don’t see many trophies. They did see the start of Diego Maradona’s career, though, until he moved to Boca Juniors. 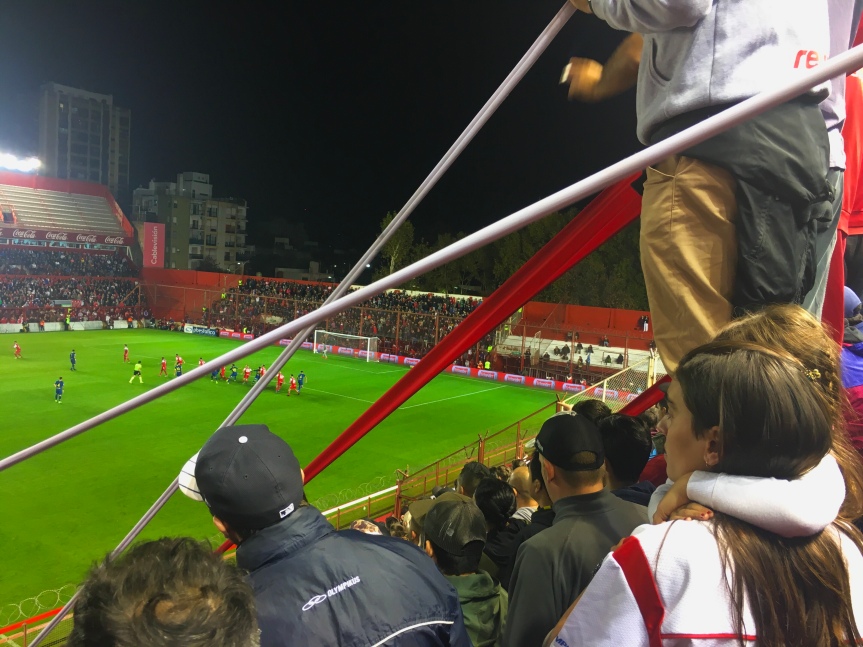 The derby of the two Juniors, the Maradona derby, the slightly irrelevant match made more important by the stakes and the fact one player had his leg broken in the last meeting. It was a game that, had we viewed on TV, would have been turned off or ignored after 20 minutes. A dearth of quality from both sides, neither of whom managed to score in the 90 minutes.

The atmosphere, though, was brilliant. We were sitting on the terrace more than an hour before kick-off, watching the Sun slowly drop behind the goal to the right of us. It filled up quickly, until people were squeezing through the smallest of spaces to reach ‘hermanos’.

Where the Sun had dropped and disappeared, fireworks exploded just before kick-off, greeting the two sides and further fuelling the crowd. The floor vibrated beneath those who refused to jump to the beat of the drum and a typically enormous amount of abuse was dished out towards Carlitos Tevez.

Of all the games in Colombia, Bolivia and Argentina, this was the best so far. And incredibly, one woman sat down during the match and breastfed her child. No one said anything or looked perturbed. There were families all throughout the stand, partly because tickets are significantly cheaper for woman and children, and that should be an example to English football. 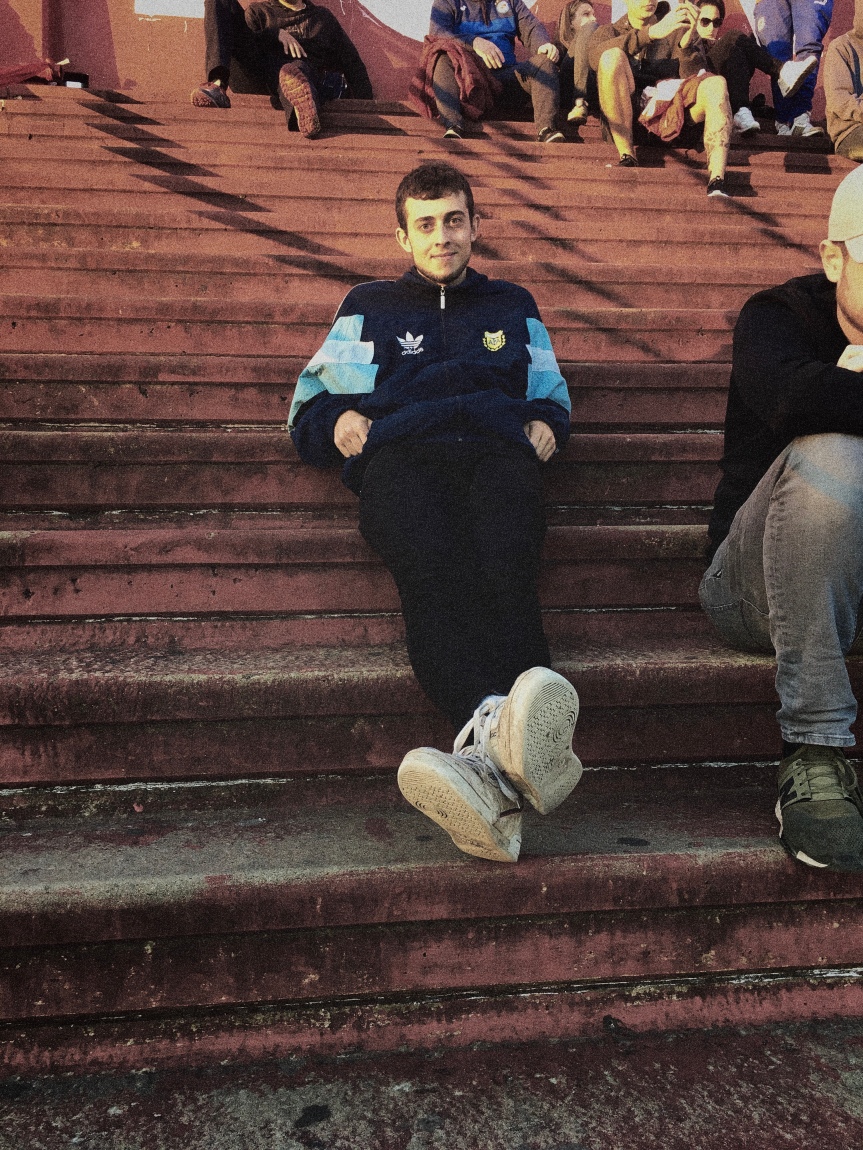 Before the match, we had returned to Mercado San Telmo, where a small 60-year-old porteño has been selling football shirts for the last 15 years, as he explained to me on Sunday afternoon. His collection is mouthwatering and my obsession is bordering on addiction. I bought an Argentina Selección jacket from the Maradona era and wore it, along with its comically baggy armpits, to the stadium.

In the very early hours of Thursday morning, I found myself walking down a cobbled street in the San Telmo district of Buenos Aires talking to Alan Partridge, or at least the man responsible for him, Steve Coogan.

We were trudging towards a tango show, where a woman in a blindingly sparkly dress would be thrown in the air by a suave, Bond-esque Argentinian man. We had just come from dinner. This was not the Wednesday night-cum-Thursday morning that I had been prepared for. 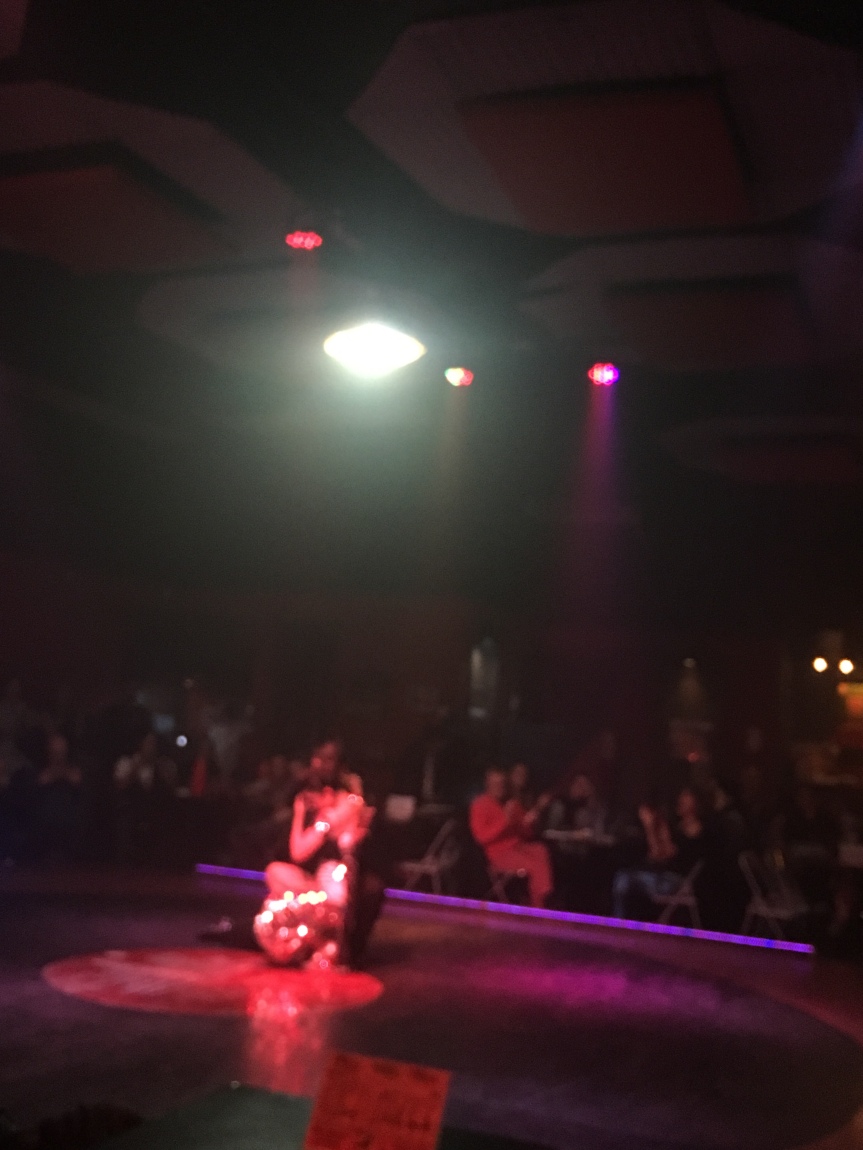 I will happily tell the full story to anyone who wants to hear it, but in short, I was going to dinner with the family friend of a friend. When I arrived at the restaurant, she pulled out a cigarette and informed me of a slight change to plans because Partridge had offered to buy us dinner after a coming together of extraordinary coincidences.

It was an incredibly surreal evening that concluded at 2AM trying to explain who Alan Partridge was to Dutch and French friends while the other Brits in the hostel laughed in amazement.

While my work on Monday, Tuesday and Wednesday mainly involves training with a group of aggressive, but friendly, Argentines from a nearby villa (slum, in English), Thursdays are an opportunity to do some real coaching.

At the beginning of the week, I travel along a long road at rush hour to Barracas. The conditions in the area are pretty good, though can deteriorate if you continue further in the right (or wrong) direction. On a Thursday, it’s a little bit different. I, along with a few others, take a bus towards the coast, across the river and into Puerto Madero. I have rarely seen areas with such stark differences between rich and poor. Huge skyscrapers reach towards the night sky just a mile away from where 20 kids follow my slightly garbled instructions in Spanish. 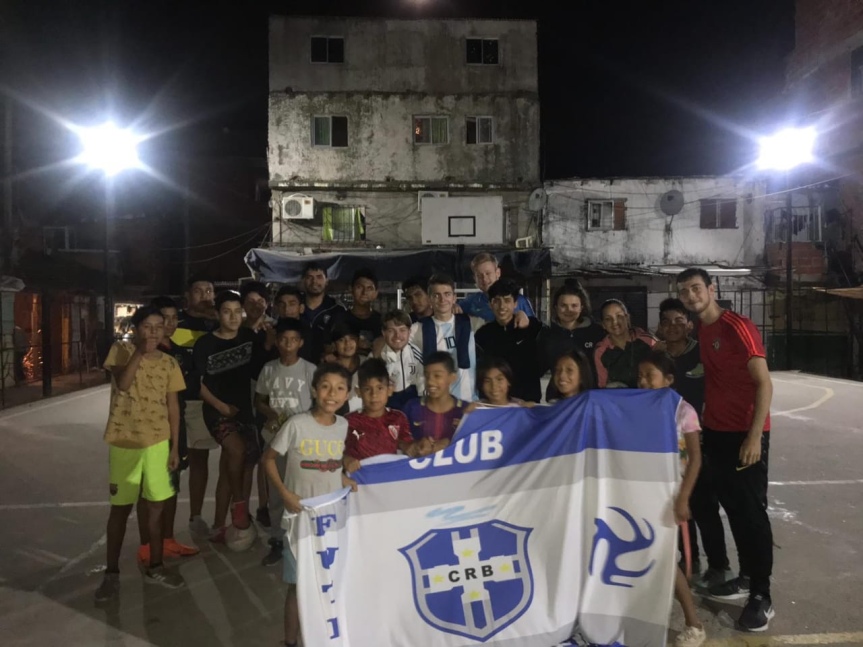 The club of Rodrigo Bueno (named after the road and area where the pitch lies) is fantastic. Kids come and go but the coach is always present to help change their lives. Stray dogs are allowed to trot through the pitch but only for a few seconds. If they don’t remove themselves before then, they are almost literally thrown off. I helped an 8-year-old climb up 15ft onto a worryingly unstable roof to collect a ball that had risen over the crossbar. ‘Like a monkey’, I said. She was very pleased with that. 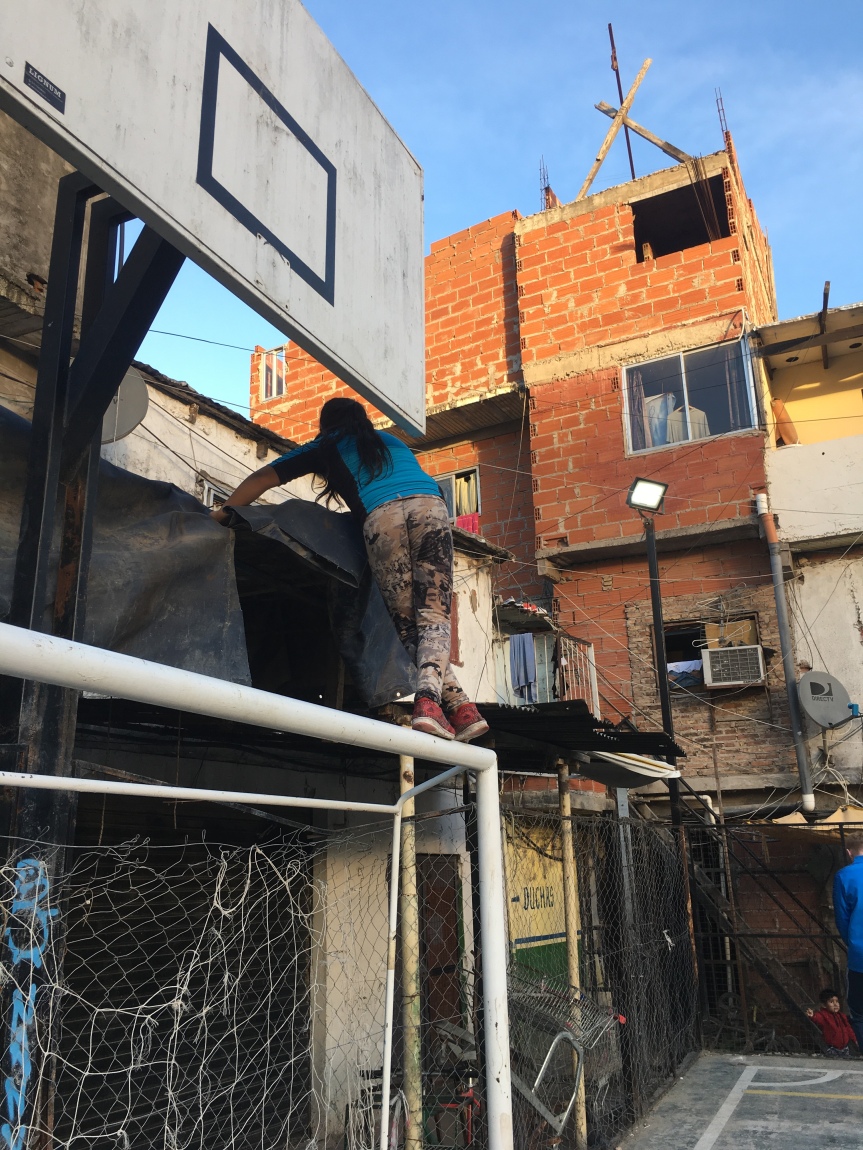 All of this came after the first of two two-hour waits in an airline office. From the frustrations of middle-class life in Argentina to the joy of the slums. That seems the wrong way round. The truth is that everyone has serious problems here, even if it is often very hard to see. The kids of the slums own smartphones, often wear fresh trainers and are obsessed with Instagram posts and playing on their PlayStations. Here, purchased goods have far greater importance than savings or a better house. Such is the economic situation that it can make more sense to just buy things you want with the money you have rather than saving it and seeing it depreciate over the course of a week.

After coaching, I dragged the other volunteers into the tiny restaurant that borders the football pitch, separated only by a small fence. Ordering a milanesa (a bit like a schnitzel) with chips and salad for a tiny fee, it was the first moment in Buenos Aires that seemed similar to Colombia or Bolivia. Cheap but brilliant food in massive portions served by a friendly local who was just happily surprised to have a foreigner sitting in her restaurant. 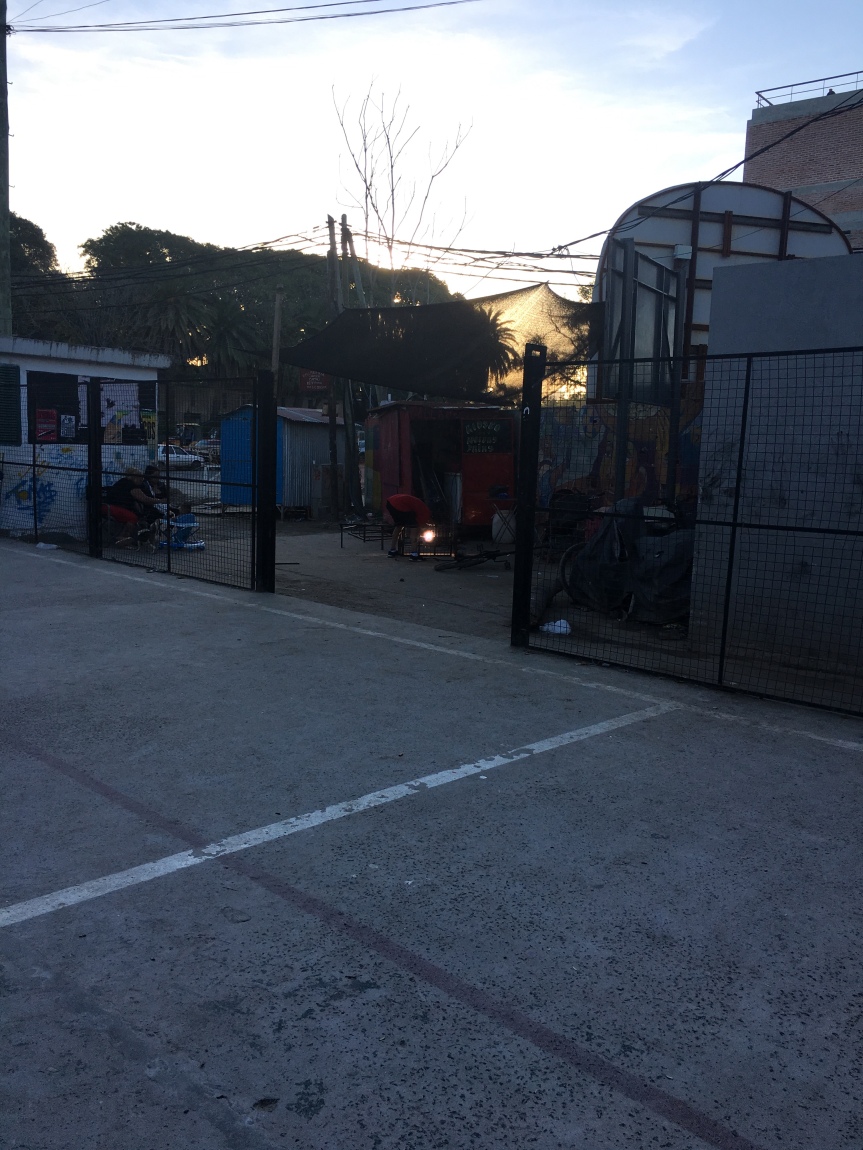 While we ate, the kids we had just coached continued to play and remained doing so as we left. On the other side of the pitch to the restaurant, an increasingly sweaty man continued to work away at a destroyed bike, quite literally playing with fire to try and make something of it over the course of four hours.

I love Argentina just as I loved Bolivia and Colombia, though in a different way. Over the last week, I’ve organised a trip to Patagonia for myself and three others. We’ll leave next Sunday. The next blog will be slightly late. It will be written on a 25-hour bus from Bariloche, in the north of Patagonia, to El Chalten, somewhat in the middle of Patagonia. Once we find Wi-Fi again, it will be uploaded.