In the week where Manchester’s second and much smaller club won the Premier League title, I’ve never been happier to be 8,000 miles away from home. I’m now seeing how much further away I can get for when one of Liverpool or Tottenham win the Champions League. Patagonia, near Antarctica, is calling my name. More on that later. On with the blog.

I arrived in Buenos Aires just over three weeks ago. I’ve had countless cups of tea per day, been taught how to pronounce Robin van Persie’s name correctly from my new Dutch friends, played pool as often as I have eaten, bought many football shirts and drank an unhealthy amount of beer. I’ve also seen the largest collection of waterfalls in the world, one of the most iconic football stadiums ever built, eaten high-quality £2 steak, watched River Plate in the Copa Libertadores, played hours of football at Argentine aggression levels and fallen in love with Buenos Aires while never losing frustration with South American lateness and traffic.

I left last week’s blog as I was about to go to El Monumental, the famous stadium of the even more famous River Plate. The richer team in Buenos Aires (compared to the more working class Boca Juniors), River are the current champions of the Copa Libertadores (South America’s most elite club competition).

As normal on a Tuesday, I traversed through the Buenos Aires traffic to Parque Leonardo Pereyra in Barracas. I joined in with volleyball and football for a couple of hours before quickly rushing off back onto a packed bus to make my way back into the centre of the city.

There, I met up with a friend from school who is also travelling South America. It took us a while to find each other because, in typically Argentine fashion, there are two metro stops with the same name just 500m away from each other. I was at one, he was at the other, and so I spent 15 minutes making circles around an intersection trying to search in the dark for someone I hadn’t seen for six months. I eventually realised the mix-up and we boarded the metro towards the coast where River Plate play with the drone of landing planes from domestic destinations overhead.

We bought a knock-off River Plate shirt, met up with my friends from the hostel and, just like at La Bombanera (the Boca Juniors stadium), felt like kids again walking into your favourite team’s stadium. I don’t care for River Plate, but the reputation of the team and the stadium, a huge bowl fitting 65,000 people, gives you the goosebumps.

The atmosphere was dry for much of the game, until River’s Brazilian opposition, Internacional, went ahead by two goals to one. Then, once more in typical Argentine fashion, the anger and passion of the Riverplatense fired up and sparked the roars of El Monumental.

They equalised in the final minute and the songs continued long after the final whistle despite the fact that this game was virtually meaningless.

Afterwards, we made our way to Jobs Bar, filled with pool tables, ping pong and cheap beer. We played ‘foot-tennis’, the game in a small astro-turf cage where you aim to kick, head or knee the ball over the net as in tennis. A good night.

The coaching has continued, although occasionally interrupted by rain. On Wednesday, with the pitch covered in a very light and almost invisible layer of water from the previous night’s fall, we slipped while playing football. I, in particular, managed to completely topple over, landing perfectly on the right side of my arse and causing an injury which has (rightly) drawn little sympathy and more derision. I continued playing in a terrible decision and have been left limping since.

Thursday’s coaching was cancelled with heavy storms and so we got stuck into the Buenos Aires nightlife once more. Living above a nightclub has its benefits during a storm.

Courtesy of a brightly patterned bucket hat purchased in Bolivia, I made some Argentinian friends downstairs with the music pumping. I temporarily traded it for an Indian headdress which one of the Argentines had brought for an unknown reason. They attempted to teach me to salsa and tango in the most basic of ways. The reaction to my efforts was a laugh more than an applause.

As with every weekend, with no volunteers having work, we go and see some sights. Although our choice thus far has been pretty limited, having gone back to the same places multiple times because we love them so much.

On Saturday, we made our way to La Boca, the colourful part of town with markets, inexplicably cheap knock-off football shirts and other souvenirs and great food. We ate choripan (a beautiful sausage-like meat in bread)… more than once. 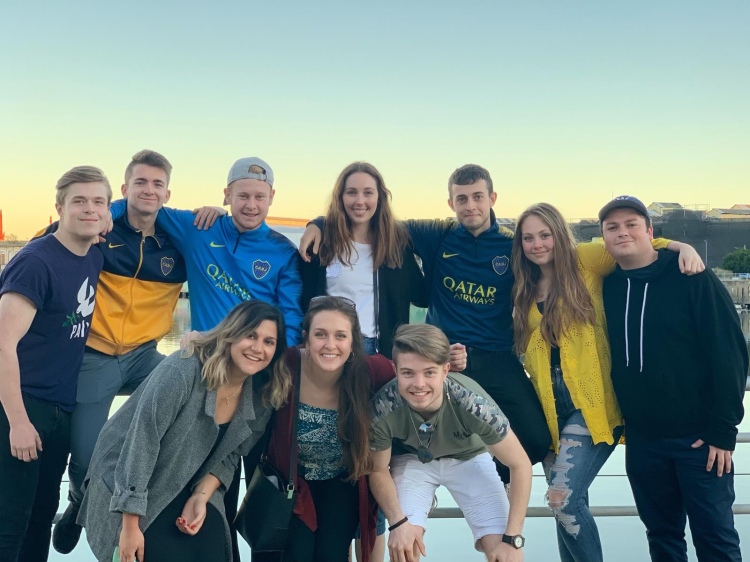 Once more, we made our way out once the clock struck 1AM for another great night. I woke up the next day having failed in my mission to sleep right through the Premier League’s final day. Instead, I ate and ignored the fact that City were champions and United had lost 2-0 to Cardiff.

To distract myself more, I joined a few others and visited Mercado del San Telmo once more. It’s my third visit to the market, and I’ve loved it every time. Every Sunday, there’s a street filled with market stalls that winds through the city for many kilometres. But my favourite part is the indoor section of the market which is open every day. There, the empanadas are unbeatable, the crepes are filled with dulce de leche and the football shirts are retro and unique. The building itself was built with European immigrants in mind, and it’s the perfect setting for good food, friends and purchases. I’ll definitely be adding to my three visits.

I returned to coaching on Monday evening, hoping that my arse/leg injury wouldn’t cause me to sit out. It was thankfully okay after initial fears that I wouldn’t be able to play for at least two weeks. I now have bruises in other places thanks to some ‘friendly’ Argentines, but they’re not too bad.

The week ahead brings much of the same. Coaching, eating, walking, drinking and enjoying life in a great city. Patagonia is in my plans and I should have a trip booked by the end of the week to see the Perito Moreno glacier and the Camino de los Sietes Lagos. See pictures below. I’m excited.