Goals change games, and they have been missing too frequently for Wayne Rooney. Yet it seems that the Manchester United and England captain is missing out on praise that he has earned due to a superb career. At times ladled with controversy, Rooney’s eleven years at United, and one at Everton, has been full of wonderful talent. Despite that, he’s remained focused on, mind the cliché, getting the three points rather than the next record, of which many he has surpassed for club and country.

It is somewhat painful to see Man United fans not appreciating the player who currently leads them out home and away every game and who has, since joining in 2004, played with pride in himself and the need to leave everything on the pitch, against Barcelona, Stoke or Cambridge United.

Even I, one of Rooney’s biggest backers at what is undoubtedly one of his worst spells in his career, can see Rooney’s hugely talented ghost following him sometimes, not quite rejoining up despite coming close at times. Yet while I can see his form, his performances, even when scoring, is and have been very poor, I can still appreciate the incredible career he has had, that some cannot.

There is a lot of talk about potential and how Rooney has never achieved his. In an era of Cristiano Ronaldo and Lionel Messi, it is difficult to become the best player in the world, though. At the start of Rooney’s career, the biggest achievements he could have completed could have been listed:

Rooney has achieved 5 of those 11 great things so far, and on Sunday he will finally break the 30 barrier. He is closing in, surprisingly quickly for an out-of-form striker, on Sir Bobby Charlton’s record of 249 goals for Manchester United. He’s already broken his record of 49 goals for England and is likely, should the captain’s armband stay with him for the foreseeable future, to break Peter Shilton’s record of 125 England appearances. 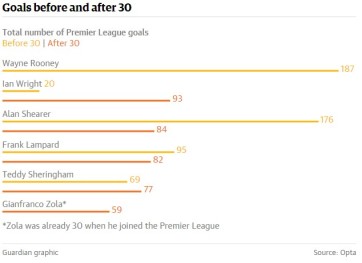 Above is the Guardian’s graphic of goals before and after 30. Rooney has scored 11 goals more than Alan Shearer before the age barrier that can break some players’ careers. The Premier League all-time top goalscorer record is one that seems the hardest for Rooney in terms of personal records currently. It will take another five seasons of 15 goals in England’s top flight for Shearer’s record to be broken, yet without any muscle injuries, as Jamie Jackson mentioned in his Guardian article on Rooney, Rooney has the ability to continue his career for at least five years after his 30th birthday.

There is one record that will give huge pride to Rooney, who revels in having challenges set to him. The main point of this rant is to disprove the theory that Rooney’s career should be disregarded because of not living up to potential. Captain of club and country, soon to be all-time top goalscorer for club and country – potential is a myth.

Another thing that pained me to see was Jason Roberts’ rant on the lack of black, or those of ethnic minority, managers in England’s top four divisions.

Those facts clearly show the issue that Roberts’ is referring to: “There is a structural exclusion of a group. This was a matter of urgency for us last year and even more so this year. The narrative seems to be that we have a structural issue around inclusion so you guys need to work harder. But then there are no positions when we come through.”

However, it took time for white footballers to develop into the current managers of today, who must be far broader in knowledge, far cleverer with tactics and have to deal with egos the size of the Sahara Desert.

Roberts is right in that the lack of Black and Ethnic Minority coaches and senior staff in football is an issue but it’s one that is improving. If you look at the very few black managers within the Football League, all have been appointed to their current role in the last five years and someone like Jimmy Floyd-Hasselbaink has just come into his first managerial role, showing the barrier is easier to break down for black former professional footballers.

Patience will pay off in the campaign to see more former professional footballers of ethnic minorities managing in the Football league, and yes, as Roberts mentioned, it could take 30 years.